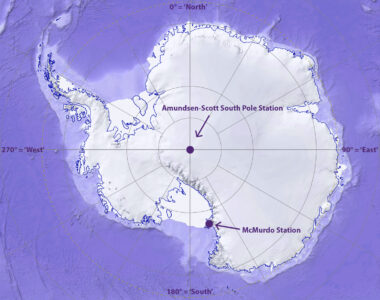 For scale, Antarctica is roughly the size of the United States. There are three US research stations: the Amundsen-Scott South Polee Station (where I will be spending 12+ months!), McMurdo station (near the Ross Ice Shelf), and Palmer Station (on the western peninsula). “But every direction is North! How can you have a western peninsula?!” Why, yes, I suppose from the South Pole every direction is North.  However, some very smart people came up with a rather simple system so that people don’t get lost trying to figure out which way North to go. Directions in Antarctica are based on a grid system where the 0° longitude line is ‘North’, the 90° line is ‘East, the 180° line is ‘South’, and the 270° line is ‘West’.

Due to its unique location on the planet, the South Pole (and most of Antarctica) only has one long day (the austral summer) and one long night (the austral winter) per year. During the summer the temperatures can get up to a balmy -30F while during the winter temperatures can drop to -120F. Partly due to the extreme cold (jet fuel freezes between -80F and -50F!) and partly due to the roughly one thousand miles between it and the next closest base, there is no transportation to or from the South Pole during the winter months. And so, a couple dozen crazy people (Hi! That’s me!)  volunteer to stay at the base all year long to keep the place running.