An Evening At Mark’s

Aka Why I’ve Been So Busy

Here at the South Pole, we make our own fun. Most all of the community events are things that someone here enjoys back home and wants to share with the rest of the community. So, for me, it was almost a no brainer to try putting on an interactive/immersive theater performance. Now, I have no background in theater or acting but I’ve enjoyed interactive theater for a long time and wanted to try my hand at it. I was able to find some likeminded people here and, together, we formed South Pole Interactive Theater.

At first, we kept everything hush hush as we spent hours secretly planning and practicing for our debut event: An Evening At Mark’s (I was told later that no one had any idea what we were up to!). The show was to be one part casino/nightclub party, one part spying, and one part murder mystery. We had so much fun coming up with characters and backstories and secret clues for our audience to find (and practicing our dramatic death scenes!) 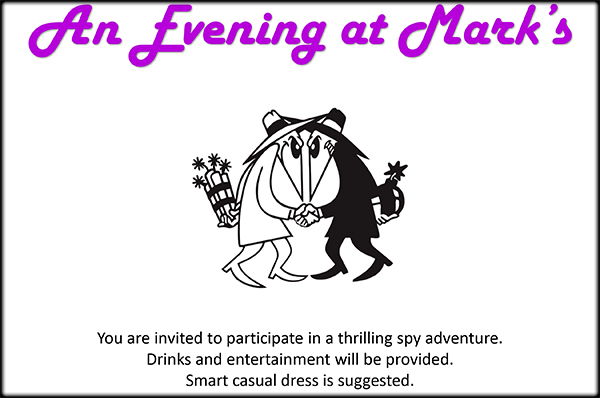 In the dead of night, we snuck around the station leaving invitations to the event (and explaining what it was) on everyone’s doors. Part of me was worried that it would be too weird and that no one would come but, as I’ve been told many times, I worry too much. The evening was absolutely awesome (even though almost nothing went to plan!) and everyone I talked to said they had a great time (quite a few people even asked when our next show would be!). Unfortunately, I completely forgot to take any pictures, I was too busy being a spy!

For the immediate future I think all of us involved are looking forward to some time to relax but my mind is already working on what we can do next!