The Sun Is Getting Real Low

At the South Pole, there is effectively one day per year; the sun sets in mid-March and rises in mid-September. Some quick maths will tell you that this means that each day here is somewhat the equivalent of 4 minutes of a ‘normal’ day back home (at least in terms of the height of the sun above the horizon). What this means right now is that we’ve been having sunset-esque skies for almost two weeks and should (in theory) keep having them for a few weeks after the sun officially sets.

Everything is starting to take on an eerie twilight quality that I just can’t get enough of. I am constantly looking out the windows to see what cool new things the light and snow are doing. One of my new favorites is when the drifting snow looks little flowing rivulets along the ground. It’s hard to describe and even harder to take a photo of but I could sit and watch it for hours it looks so cool.

I have also enjoyed watching the shadows get longer and longer. The shadow of the station has gotten to be over 100 yards long and reaches all the way to the ceremonial pole. 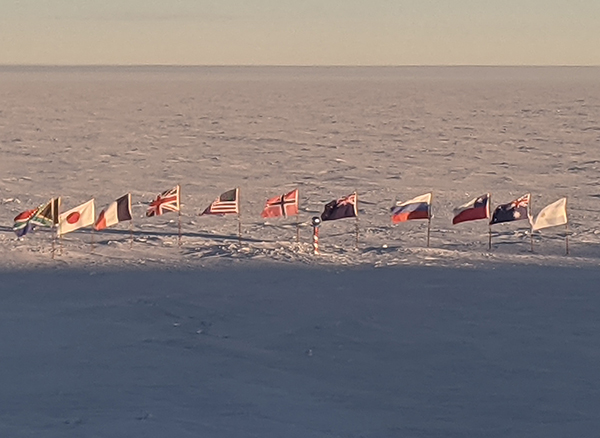 Soon we will say farewell to the sun for six months. I, personally, am excited about all the new sights and experiences that the night will bring. I have missed seeing stars and can’t wait to see my first aurora!